One of the important skills for the future, which all kids need to develop (according to a growing number of researchers and forecasters), is ‘critical thinking/problem solving.’

But what is critical thinking, and how do you learn it?

But what does that mean? And what does this look like, when we’re living in a world with SO MUCH available information, areas of specialization, that it’s impossible for anyone to take the time to analyze and evaluate every topic or decision point that comes their way.

Next, I searched on Tony Wagner (author of Creating Innovators, Closing the Global Achievement Gap, and most recently Most Likely to Succeed, books I’ve read that stress this future skill).  Here’s a summary from Tony Wagner’s site on critical thinking and why it’s important:

“The idea that a company’s senior leaders have all the answers and can solve problems by themselves has gone completely by the wayside…The person who’s close to the work has to have strong analytic skills. You have to be rigorous: test your assumptions, don’t take things at face value, don’t go in with preconceived ideas that you’re trying to prove.”
—Ellen Kumata, consultant to Fortune 200 companies

And in an older article of his, I found this:

To compete in the new global economy, companies need their workers to think about how to continuously improve their products, processes, or services. Over and over, executives told me that the heart of critical thinking and problem solving is the ability to ask the right questions. As one senior executive from Dell said, “Yesterday’s answers won’t solve today’s problems.”

Last fall I went through this Udemy Course: Develop your Critical Thinking Skills – Easily! which I really enjoyed (once I found the speed controls anyway; the instructor speaks very slowly). It goes through how to evaluate a claim or argument as well as the evidence supporting it.  The authors say, and rightly so, that thinking critically is being able to think more logically and rationally and being able to present your point across in a clear and convincing way.”

So when talking about critical thinking, that’s what we mean – testing our ideas, thoguhts, beliefs, models, reasoning, etc. for soundness, validity, based on evidence.

How do you learn it?

Well, I suppose you could take the above Udemy class that I did!  That helped me recognize logical fallacies, bad evidence, encouraged me to look for my own biases…but well, it wasn’t applied learning, really – I can’t say I’ve picked up a habit of looking at real life or work issues more critically as a result.

So here are some other more tangible activities as well:

This past weekend I heard a talk by Anna Sharfeld, 6th grade teacher at Hollister Elementary, on critical thinking and math. She has a lovely, simple technique to get her students starting to ask questions and explore a problem/scenario more deeply: Notice and Wonder. 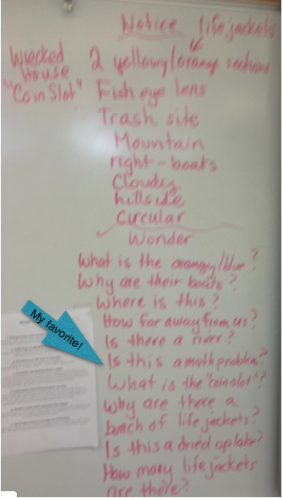 First, she asks her class what they NOTICE about an image/problem/scenario. Everything gets written on the board like the image at the right.

Then, she has them WONDER: ask questions. What do they wonder about the image?  Have a look at her blog posts on this particular lesson! Quite amazing. (I think I would have loved math if this is how it had been done when I was a kid.)

She described taking the numbers and question OUT of a word problem, for example, and then doing NOTICE and WONDER – the kids explore what info they would need, what the question they’re solving for might be, etc.

While this is not evaluating evidence for an argument, it is questioning assumptions and getting them into the habit of asking questions and exploring a topic from all angles!

There are some good stories illustrating critical thinking in schoolwork in Most Likely To Succeed – both the book and the film! (But I have the book on Audible and it’s a nightmare trying to find anything.) Here’s another example from online resources at High Tech High, the school used as an example in MLTS: Socratic questioning.

In Socratic questioning, the teacher asks a series of questions that force the student to defend a claim. This essential step ensures that the [project] involves critical thinking. It is inspired by the dialectical method in Plato’s dialogues. The teacher opens with a question, the student responds, and the teacher asks another question based on that response. This back and forth continues until the student realizes that his reasoning is flawed, or not.

This process resembles the tying and unraveling of a knot. Prodded by the teacher’s questioning, the student will sometimes get stuck, unable to defend her reasoning. The teacher then helps the student unravel the knot by asking another series of questions, or by assigning a follow-up writing assignment that modifies the argument or rethinks the claim entirely.

In the following example, a student defends his claim that egalitarianism is the most just social philosophy. The teacher asks a question about an area of interest for the student—sports—in order to make connections with ideas studied in class.

Teacher: Do you believe the salaries of professional athletes are morally justified?

Student: Albert Pujols just signed that big contract with the Angels and he takes up 1/10 of the MLB paycheck. I don’t think you need 300 million dollars, or whatever it is. They don’t need as much as they get. I’d be fine playing for a million.

Teacher: Okay, so, what’s an idea that can be used to make an argument that they shouldn’t be paid that much?

Student: They don’t deserve it. They were born lucky. It’s all luck.

Student: I’m sure he does, but how should I put it … I think it’s more like he doesn’t do as much work as others do. My neighbor has three jobs and he doesn’t make nearly as much. It’s not fair.

Teacher: Can you think of a situation in which it would be fair for Pujols to make that much money?

Student: If it benefits the disadvantaged.

Teacher: John Rawls called that the difference principle. Is that what’s happening now?

Student: Not really, but people like to watch him. You can say they benefit from that.

Teacher: You started by saying athletes don’t deserve to make that much money, but then you said that they can make a lot of money if they follow the difference principle. Now, how can we apply that to your case study regarding water in Haiti? How can egalitarianism help Haiti?

Student: In Haiti, people don’t have homes or jobs after the earthquake. Egalitarianism can help make sure everyone has jobs.

Teacher: You might have to invest money for education and create incentives for companies to do business there. That would cost money. Where would it come from?

Student: I’m not sure. Maybe we could give money to them. From taxes or charity.

Teacher: Think about it. We will continue talking about this in the debrief.

At least two things are accomplished through this line of questioning. First, the student has to defend a claim using reasoning and evidence, which is the most fundamental aspect of critical thinking. The teacher’s questioning provides counter-claims with which the student does not agree and to which the student must respond. Second, the student applies general concepts to specific cases, and must be prepared to defend the efficacy of those concepts in support of his claim.

In the above example, the student was asked to apply the difference principle to a case we did not study in class, but which he studied on his own—the water crisis in Haiti. And there’s the rub. It’s one thing to defend an argument that has already been made, but since the goal is to learn how to think and not regurgitate previous arguments, the student is asked to apply concepts and argument skills to other examples. In this case, the student was asked to follow up in writing, but if more time were available the teacher could continue his line of questioning until the knot, previously tied, becomes unraveled.

And thank you, Buck Institute for Education, for this collection of further resources which I’ll start digging into:  http://bie.org/blog/resource_list_critical_thinking_in_pbl

This site uses Akismet to reduce spam. Learn how your comment data is processed.